INTRODUCTION TO THE SET
Burger King as a concept began in 1953 in Jacksonville, Florida. Keith Kramer and his wife's uncle Matthew Burns began the company as "Insta-Burger King," and soon after began franchising the concept. The key equipment for Kramer and Burns was the use of the Insta-Broiler, which became a part of the required package for franchisees.
One of their franchisee groups was owned by James McLamore and David Edgerton. The two were alumni of Cornell University's renown School of Hotel Administration, and they were looking for a business to open. They'd visited the original McDonald's hamburger stand -- before the MacDonalds were bought out by Ray Kroc -- and thought that it was an idea they could replicate. They obtained a franchise from Kramer and Burns and opened up shop at 3090 NW 36th Street in Miami -- a spot which is now the home of a used car and title pawn lot.
McLamore and Edgerton were wildly successful and opened multiple locations by the end of the 1950s in and around Miami. But, they ran into problems with the Insta-Broiler -- the beef patty drippings caused the heating elements underneath to rust and degrade, thereby requiring replacement. So, they came up with a solution that moved the patties over the flame on a metal conveyor belt in what they called the "flame broiler."
Meanwhile, Kramer and Burns had expanded quickly but did not have their own corporate finances in place. By the end of the 1950s, their concept was in trouble. This led them to sell their company and the rights to issue franchises across the country to McLamore and Edgerton. The two renamed the company "Burger King of Miami," which eventually became the Burger King Corporation. The headquarters for Burger King is still in Miami -- located on the other side of Florida Highway 836 from Miami International Airport.
The company grew to 274 restaurants nationwide by 1967. The problems that the company faced at the time are problems typical to franchises generally: lack of consistency across locations, an inability to maintain brand standards, an inability to be involved in sales of franchises to the next person (potentially leading to undercapitalized franchisees), and franchisees who were not contractually prevented from "going rogue" and adding menu items however they saw fit. Sensing an opportunity, the Pillsbury Company purchased the franchise system from McLamore and Edgerton for an estimated $18 million.
Pillsbury's ownership was wildly successful though bumpy. Pillsbury grasped control over the franchise relationship and imposed multiple new restrictions over new franchisees. Menus were locked down. New items were added -- including my favorite, the Original Chicken Sandwich, which tastes so good because it is comprised of chicken, breading, and salt (it has 1170 mg of salt -- just 78% of your recommended daily allowance of sodium!). Burger King even took on the 800-pound gorilla in the room by making direct attacks on McDonald's and its way of cooking burgers. All of this was under the leadership of Donald N. Smith (a former McDonald's executive) and Norman E. Brinker.
Once Smith and Brinker left, however, Pillsbury started giving leeway back to the restaurant owners to operate more independently again. Profits stalled. In response to BK's declining valuation, British beverages giant Grand Metropolitan PLC (which later merged with Guinness to form Diageo in 1997) first tried to take over the company in a hostile takeover and, then, acquired it through an agreed sale in 1988 for $5.7 billion. Grand Metropolitan expanded worldwide and tapped into new markets like airports, on-campus university locations, and sports arenas.
Once Diageo formed, however, BK seemingly got ignored by its corporate owners. Recognizing that alcohol was a more lucrative business for the company and was its core business, Diageo spun BK off and sold it to TPG Capital for $1.5 billion in 2002.  TPG modernized operations, changed up the trade dress to update it to a more modern look, and required remodeling or replacement of nearly all of BK's locations in North America to meet "brand standards." Beer was added to the menu in some US locations as well for the first time. TPG floated BK on the New York Stock Exchange as well.
By 2010, TPG was looking for an exit strategy. In September 2010, TPG sold its 31% stake in the company to 3G Capital for $3.26 billion -- a massive return on TPG's investment over and above the money it made when BK went public. 3G pushed to expand BK locations in Brazil, Russia, India, and China, planning for more than 2500 new locations. Another addition to the BK offerings came in August 2014, when 3G purchased Canadian giant Tim Hortons.
EXEMPLARS 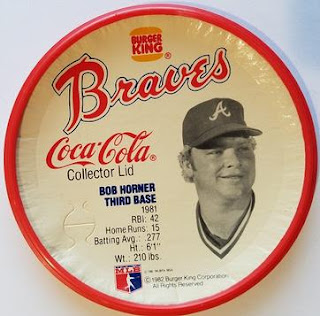 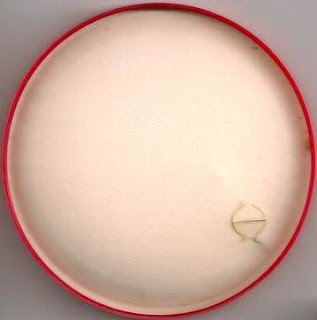 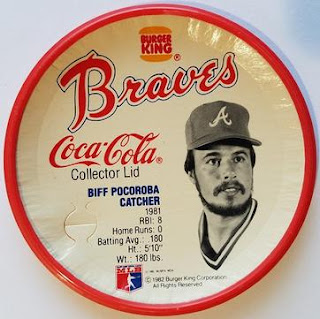 In 1982, no team in America was hotter than the Atlanta Braves. Managed by future HOF manager and former Brave Joe Torre, the team started off the year with a record-setting 13-game winning streak behind the pitching of Rick Mahler, Larry McWilliams, Gene Garber, and Rick Camp and the hitting of eventual 1982 MVP Dale Murphy.

To commemorate the streak, Burger King teamed with the MLBPA for what appears to be a fully licensed set of 27 lids to accompany sodas -- or, as they would have been called in the local Atlanta-area Burger Kings, cokes (which is a generic term for any fizzy drink in Georgia, basically). As Beckett notes, these lids were intended for use with large cokes and specifically for a special collector's cup listing out the scores for the 13-game season-opening win streak.

It appears that the lids simply used the photos that the Braves had on hand for each player for publicity shots. All the photos feature the players' heads poking out of their V-neck polyester Braves uniform. Next to the photo are basic stats from the strike-shortened 1981 season and the players' heights and weights.

Apparently, the lids were distributed to local Burger King stores as complete sets. At least that is what this auction seems to imply by saying by selling the lids in the auction as a complete set "still wrapped in originals [sic] cellophane, torn on top." Does this mean that you got the complete set of lids just by purchasing a single large drink? That would seem to be unlikely and that, instead, the lids were provided to franchisees in sets and whatever lid happened to be on top is what you got.

As you can imagine, finding these lids in top shape is a challenge. This is, after all, a drink lid that was intended to be penetrated by a straw in a pre-perforated hole. Add in the fact that the lid is made of wax-covered paper inside a plastic ring, and you have a recipe for an item that would be very difficult to find intact.

Just one in Phil Niekro.

Of the remaining players, Dale Murphy gets a lot of love from Braves fans in particular and fans of 1980s baseball generally. He never got above 23.2% or below 8.5% of the vote from the BBWAA during his 15 years on the HOF ballot despite the fact that his numbers match up relatively well on all of Bill James's HOF standards other than the "HOF Standards" board. Murphy's problem is one of a career without the "hanging on" stats. His WAR for his 7-year peak is 41.2 -- not far off the average CF's 7-year peak of 44.7. But, outside of his peak, Murphy's career war is just 46.5. Basically, Murphy's career was all peak and no filling.

Perhaps if Murphy got to play the entire 1981 season to allow him to get over the 400-homer mark for his career (finished at 398), it might have made the difference. Or, if he didn't come up for election in the midst of the fully steroid inflated late 1990s, his numbers would have seemed more acceptable to voters.

Still, if Murphy were inducted tomorrow, he'd be a better HOF member on his resume than a number of guys in now, including his contemporary Harold Baines, whose main recommendation over Murphy appears to be longevity (in the midst of the steroid era) over peak.

My father-in-law has worked for and/or owned Burger King franchises for his entire working life -- since he was 14 years old, in fact. My greatest disappointment in him is the fact that he did not keep any of these lids or any other baseball-themed items from Burger King.

Since I lived in Wisconsin at the time, I never heard of these lids until much later in my life. If I had lived in Atlanta at the time, well, I almost certainly would have been a Braves fan who really wanted these lids.

I was surprised to note that there were fairly significant parallels between the 1982 Braves and the 1987 Milwaukee Brewers. Both were very streaky teams that started out the season with 13-game winning streaks only to suffer double-digit losing streaks later in the year.

The Brewers started out the 1987 season with a 20-3 record through May 2. Then, on May 3, the team started a twelve-game losing streak to go from 20-3 to 20-15 -- thereby becoming the first team in major league history to have winning and losing streaks exceeding twelve games each.

The reason that the record had to be "exceeding twelve games each" is that the 1982 Braves weren't far off that. The Braves won 13 games to start the season -- culminating in a walkoff win against Cincinnati and Bob Shirley on April 21. Unlike the Brewers, though, the Braves waited until August to go on their epic losing streak. From August 3 through August 13, the Braves lost 11 straight games, including four games lost in walk-off fashion in extra innings (including 3 straight to the Dodgers on August 5-7). The Braves went from being 7 games ahead of the pack on August 2 to being 2.5 games out of first by August 13.

In terms of getting these lids, there seem to be a few lids floating around on eBay, with three complete sets ranging in price from $63 to $100. Those prices seem a bit exorbitant, but, as I said, these have to be pretty tough to find in good shape.